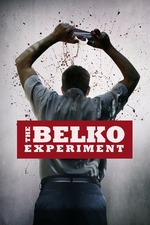 "Office hours are over!"

The "trapped in a building and bad things happen" genere, has a long and storied past, with such classics as Demons 2, Dredd, The Towering Inferno, and lest we not forget Die Hard.
Sure, there are a few stinkers like Poltergeist 3, and The Anna Nicole Smith lead Die Hard ripoff Skyscraper.

I'm happy to report, The Belko Experiment can be put in the classics column.
While not a new concept, this tale of office workers forced into killing one another shines in the execution of the whole thing.

It's a entertaining, gory, social commentary on human nature, personal need vs the greater good, and paranoia.

Its Lord of the Flies played out in a board room instead of a desert island, mixed with heavy influences from Battle Royal, The Purge, with a dash of the moral message of The Hills Have Eyes thrown in for good measure.

Director Greg McLean, the guy who directed both Wolf Creek movies and the killer crocodile flick Rogue, seems to be saying the office is full of animals in slacks and ties, and people will do ANYTHING to survive.

Look for John C McGinley performing his tried but true "grinning weirdo" character, and the great Michael Rocker as a matience man.

My only gripe is the movie builds up to a little to over the top crescendo of violence and mayhem, that seems to slightly undermine the message the movie is making, but its a fantastic ride until then.

Its good stuff, check it out.