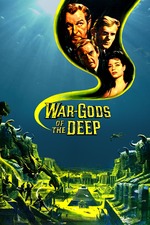 With Vincent Price playing another tormented megalomaniac (and reading some Poe, of course), David Tomlinson doing his Disney thing but for AIP, secret passages, an underwater city, an underwater volcano, and mermen who look like Creatures From the Discount Lagoon, there was only like a .0001% chance that I wouldn't at least like this. If they had decided to throw in a more coherent story, cut back on that interminable underwater action (1965 was a punishing year for filmgoers who didn't enjoy watching slow-motion fights and chases under the sea), and let Les Baxter do the score, I would have been even more into it.

Suggestion for Tab Hunter's line after Vincent Price gets crushed by falling debris: "Talk to the hand!" Trust me, if you've seen the movie this is hilarious.