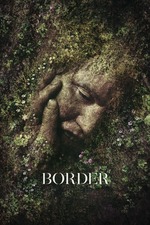 Border (Swedish: Gräns) is a 2018 Swedish fantasy film directed by Ali Abbasi with a screenplay by Abbasi, Isabella Eklöf and John Ajvide Lindqvist based on the short story of the same name by Ajvide Lindqvist from his anthology Let the Old Dreams Die.
Customs officer Tina is known for her extraordinary sense of smell; It's almost as if she can sniff out the guilt on anyone hiding something. But when Vore, a suspicious-looking man, walks past her, her abilities are challenged for the first time ever. Tina can sense Vore is hiding something she can't identify. Even worse, she feels a strange attraction to him. As Tina develops a special bond with Vore and discovers his true identity, she also realizes the truth about herself.

I'm having a particularly hard time deciding what to comment on first so perhaps I should start with the easiest one to make. This film was nominated to win an award for its use of cosmetics - specifically, in hair and makeup - and I have to say that this was more than well deserved. Soon after finishing ‘Border’ I looked up the primary cast members and I was absolutely shocked by the transformation that was achieved. The characters are designed and described as being something out of a fantasy or from a fairytale like universe, and the effort made to achieve this unique aesthetic shines through.

I applaud ’Border’ for avoiding the temptation of making this into a story about romance with the audience is encouraged to fawn over. It is obvious from the start that Tina and Vore have something significant about themselves in common - this assumption is based on their appearances - but is there still a mystery about their connection that is ultimately alluring. The development of their relationship is simultaneously predictable and surprising at the same time given Tina’s insistence that something about Vore is “off” (is that not something we often feel about some of our own loved ones?) and this Enigma is meaningfully explored over the course of the entire film; if you are looking for straight answers I will just let you know now - this isn't the film for you.

I'm not sure if the appearance of these main characters is meant to be an allegory for something else, but there are real world applications the way they see themselves and the way they are treated in their day-to-day lives. Tina has accepted the fact that she is not conventionally attractive, and she copes with this by honing in on her (unique) skills that make her useful to others. Vore, on the other hand, has a marked amount of animosity held within him and chooses to recluse as opposed to assimilating with the rest of society. Through the conversations they have with one another it is quite clear that their upbringings have resulted in completely different outcomes despite having some very significant commonalities leading the way.

Despite the unquestionably graphic nature of this film - seriously, some things in this film just seem rather unnecessary - I felt hardly moved and can't really read the director's intentions. It is practically beat into our heads that Tina and Vore are largely misunderstood, but little is done to make the audience feel any amount of emotional investment towards their separate characters.
This is made even more obvious towards the end when we find that Vore is involved in a particular kind of illegal activity (I won't mention what so as to not spoil); Tina reacts the exact way we would expect her to, and we (the audience) are given little-to-no reason to offer sympathy or hold back any snap-judgements we might make. Tina’s experience with having to come to terms with the fact a potential loved one can be capable of what some might be considered evil is relatable, but the fleeting nature of their relationship doesn't substantiate the emotions we are supposed to assume she has at the conclusion.

I have no personal qualms with this movie; I think it requires a lot of imagination to ingest and even more so to create and represent.
I have no knowledge of the short story this is based off of, so I can also not hold the director responsible for the way in which it unfolds. It would be vastly unfair to decide whether or not I like this film based on the content when I can't make a fair judgement about the media that inspired it.

With that said, this is a very well done film when we are discussing cinematography and effort needed to bring these characters to life.
I can't say I'll be watching this film again in the future anytime soon out of my own volition, but I do think this is watching at least once if the opportunity presents itself.

The People vs. Larry Flynt