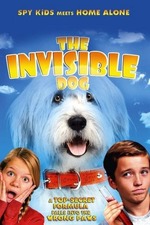 Fred Olen Ray seems to have a fascination with invisibility. I decided that instead of watching something classic of his such as Hollywood Chainsaw Hookers, I would watch Abner, The Invisible Dog. Fred has already directed Invisible Mom, Invisible Mom 2, and Invisible Dad. So here he's going with what's familiar I guess.

The story concerns Chad Sheppard whose birthday has gone by, and all he wants is to get laid... Oops sorry PG movie. I meant he wants a kiss from a girl and to be with her. Instead, he gets a talking invisible dog (who can be a dick). This dog, which drank top government secret liquids to make him invisible, has to fend off bad guys (one of them is a Disney Channel reject in David DeLuise)! Simple story.

And an incredibly boring one at that. The humor in this is so tame when talking B-movies. The acting is of course terrible, but there are not any moments where it's true "it's so bad it's good" quotes. Then again, this movie is directed at kids. I just so happen to be the only 20 year old retarded enough to spend a Saturday night watching Fred Olen Ray shit out another movie. The dialogue of course is atrocious, but lazily and blandly so. Exposition is just thrown in for shits and giggles, except without the giggles (aka it's shit). You do not know how many times I was cringing. It was a non-stop train wreck mess. This movie at times tried to imitate Scooby Doo. Let me say that again. This film tried to make Abner look like a God amongst talking dogs.

Chad and Abner unfortunately will be no more famous than many other B-movie toilet scrapers. Hell, my student short film has more views than this at 6. SIX! That's irrelevant though because you want to hear about my recommendation, which is to not see this. I shoulda watched Bad Girls From Mars.