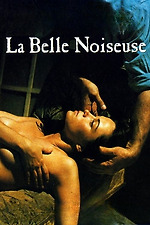 Seen as part of the Letterboxd Season Challenge; week 1

Most movies taking on the subject of art, in some form or another, usually either does so in one of two ways; depicting something from an artists life, including a crucial turning point/inspiration, or they revolve around a writer, written in mostly a less than subtle way to hype the genius of someone in that profession (oh, how those writers enjoy to blow their own horn).

Although La Belle Noiseuse also touch on an artists life as he gets back into painting, this movie is something else. More than anything else, Le Belle Noiseuse takes on the process of creating art in a way no other movie (I've ever seen) does it. In less than four hours, Rivette somehow managed to actually let us understand, participate and come to admire the dedication going into making true art.

Now, I'm no admirer of this particular kind of art. I know less than nothing about the power of paintings, I've never felt touched by art in that form, and I've yet to see one that have grasped something truly inspirational. Still. Movies have done it for me quite a few times, so I'm not surprised it can have that effect and power.

This movie is long, and somewhat demanding, but do not let that discourage you. It feels a lot shorter than its runtime, once you let yourself get wrapped up in what Rivette, Piccoli, Béart, Birkin and co let you participate in. And lets be honest; if you love movies as an art form, you really owe it to yourself to emerge in the process, as they probably never will be able to make the equivalent for movies. As such, Rivette have achieved something extraordinary.

There's quite a few things about this movie that impresses. Sure. You can be shallow, and just enjoy it for all the time Béart spends modelling in the nude. Or you can enjoy the cinematography, the sounds the artist's pen makes on paper as he draws his sketches, the human truths and growth for all the involved characters, or the evolving interactions and understandings between the artist and his model. With a close to four hour runtime, La Belle Noiseuse feels more like a two and a half hour movie. Rivette should definitely be credited for that accomplishment.

I've only seen a handful of Michel Piccoli's movies before, and all of those from his possibly strongest period in the late 60s and early 70s, but he's always been impressing me. With Emmanuelle Béart I've also only seen a handful, but I've previously referred to her as;

"One of those angels disguised as actresses, but also with the talent to back her beauty."

It's not about the beauty you notice at first glance, but rather about the power she manages to portray. I've also seen her play of older men earlier in Claude Sautet's Nelly and Monsieur Arnaud opposite Michel Serrault, so going into this I was confident in the two leads Rivette had at his disposal. Neither disappoints, and yet many will hail the supporting Jane Birkin even more. Personally I wouldn't go that far, but it goes to show how well Rivette manages to take in the complete picture, and not loose himself in his most hands on leading duo.

La Belle Noiseuse is as far from what a Hollywood take of the premise would be likely to be. I can easily imagine how a movie with an old Tom Hanks would be made with the latest Shailene Woodley cast as his model, and I thank higher powers for other film-making. This might be a little too French for some tastes, especially so in the first hour, but I for one am grateful I can truly appreciate this kind of film-making. It's inspired and dedicated work, and the end result is to me nothing short of a masterpiece.

Also watched to check it off my TOTAGA-list, and stick with My Year Abroad theme of France for 2015.

Rewatch-probability: 4/5
(Yeah, despite its runtime and the knowledge from this first viewing, I wouldn't hesitate to once again enjoy the time within the artist's studio)