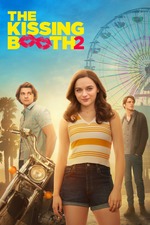 I’ve found myself enjoying both of The Kissing Booths. They’re definitely not technically good films: they’re overly cheesy, incredibly cringe worthy and as films they’re pretty bad. But the first two reasons there are the reason I’ve been enjoying them enough to give them a positive rating.

Like I said, this film is so cheesy and cringe worthy at times that it’s hard not to laugh at quite a few point in the film. There are multiple moments that (much like the first) had me sat there like “oh god reallyyy” from how poor it was. Some of the dialogue was just not good to put it simply, and it really didn’t need to be over two hours long (around 90 minutes would’ve been good enough). At times this very predictable too.

And Noah is just not that good of a boyfriend, Marco was so clearly better.

But on the positive side of things: I found this fun quite fun. I enjoy cheesy teen films, and this is most definitely a cheesy teen film. A lot of the humour did actually land for me, so that’s a bonus (though some of it didn’t work). Despite some of the acting being ‘meh’ at times, the cast was relatively charming for the most part and it seemed like they were having fun.

At the end of the day, The Kissing Booth 2 was enjoyable enough for me to like it, despite it being a technically poor film.