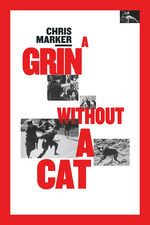 In extreme cases, someone has the power to decide which side of the street you can walk on, and if you pick the wrong side, they'll kick you back into line. So the thing that prevents you from crossing the street is the state, but if you do cross it, and you force the thing to step back, its the state that steps back.

Marker made one of the best opening montage in history paralleling Battleship Potemkin with revolutions happening across the world, starting off with братья! spread across the entire screen -- brothers, then multiple raised peace signs, a gesture that opened and closed the film, embodying its enitre philosophy, then Berlin, Potemkin, Paris, Potemkin, Washington, Potemkin, and so on. There is a tangible internal tension in the air, there's collision, contradiction, violence, communism and blood dyeing the atmosphere red, anger, too, an atmosphere of anger so thick even the camera was trembling, as pointed out by marker himself. The documentary simultaneously acts as an aggressive call to action and a eulogy (for the entire leftist movement? collapsing under the weight of infighting, assassinations, police brutality, state media), on the streets, a man said: "vote as red as you like, but it will always fade with time." The filmmaker mourned, but didn't waste too much time mourning. It is one of the few rare times where there is a sense of urgency in what marker was trying to convey, though we did at one instance took a small detour after a montage of funerals to talk about -- you guessed it -- cats, a much needed breather after a heavy topic, for sure, but aside from that, there was no more room for marker's usual playful pondering because there was so much to cover: Vietnam, India, Colombia, Cuba, Chile, Japan, etc, raised fists and shouting all across the world, exchange of words, books, leaflets, all fighting for the same cause, yet, according to the filmmaker, it was still not enough -- "nothing would be the same, definitely, nothing would be the same." It's a deeply affecting, sobering work which importance cannot be overstated. At the end, it must be noted that marker still remained hopeful of the future, after all, even when the wolves were deliberately hunted to the brink of extinction through the use of creative weapons engineered by the government, 15 years later, some wolves still survived.