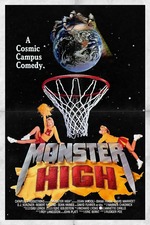 Wildly wacky comedy with a third-act Humans vs. Monsters basketball game to stop "Mr. Armageddon" and his gang of ruffians including a computer man, two aliens, a mummy, a munchie, a zombie with a handgun, a huge monster made out of a pot plant and more.

This is one of those movies that will be easy to hate but I can't dislike anything this outrageously silly and it throws so much at the screen that some of it ends up being pretty funny. There's killer Converse shoes, murderous computers, a video game about a dick shooting bibles, a butt-crack 3.5" floppy drive, and a lot more.

If you took out the copious amounts of boob shots this could maybe have passed as a PG-13 comedy but they really lean in on cutting away to breasts as a joke for whatever reason, especially in the first half.

There's a couple running gags in particular that go from "huh?" to "ok that's great actually." And a really good "basketball hovers on the rim" bit that sealed the deal.