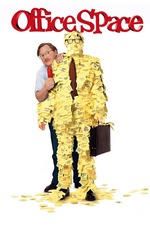 Been a while since I dropped into the Morningwood Apartments to hang with my man the modern-day Bartleby, Pete Gibbons. What a name, eh? Character names really are a litmus test of writing ability, and Mike Judge is right up there duking it out with Pynchon to be king of the hill. Gibbons — among the more humanlike of the simians, marginally more so than Michael Bolton. But the best name here is Bill Lumbergh, with its indefinable overtones of lumbering slumminess, of sleaziness and crumminess, of suspenders-wearing, brilliantined, sociopathic sliminess. When he shows up thrusting in Gibbons' sex-dream you realize this, even more than the grim suburban premises of Initech, is Lumbergh's natural habitat.

The hip-hop needle-drops, which reach their apogee with Gibbons' glorious Damn it Feels Good to be a Gangsta liberation montage, besides constituting a fine playlist, serve a couple of cool purposes. Most obviously the film's soundtrack is a satirical counterpoint to the servile existence of the all-white (Ajay excepted) cubicle-dwellers; the aural reverie of the peon. Gibbons' inner dreamer is active enough that it can be revivified by hypnosis; Michael Bolton on the other hand has succeeded in permanently walling up the fantasy-life that terrifies him, a tension manifest as he hastily closes the car window and quiets his beats when it seems like he might be approached by an actual live black person. But I also think Office Space's soundscape can be read in reverse, that the stick-it-to-the-man, get-rich antics of Gibbons, Ajay and Michael Bolton are a kind of gangsta parody, stripping away the theatricality from Ice Cube and his ilk to suggest that their world, too, is workaday and transactional at heart.

It's true that it loses its groove toward the end, Judge jibbing somewhat at the feature format, but its best moments are as sharp as ever and its characters (moustache-champs Bob Slydell and Lawrence my faves this time around) ever more endearing, while the initial sketches of open-plan purgatory are still as close as we've come to an American version of The Office.