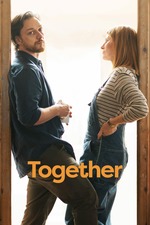 I'm at a complete loss here, because Together is a COVID movie from the director of Extremely Loud and Incredibly Close, which...okay, go back and re-read that sentence. The guy who made the one where CGI Tom Hanks flew by the screen after falling from the Twin Towers is making a COVID movie, a genre already filled with such gems as Locked Down and Songbird (Malcolm & Marie can also probably be slotted in there, but at least that fucking thing has the good sense to never once mention the pandemic). The mere notion of this movie should be enough to send any sane non-masochist person running for the hills, and yet the film is...fine? Pretty good, even?? I'll be honest, there were long stretches of this thing that I was really, really getting into, and while I don't think this thing totally holds together in the ending - I don't believe where the couple ends up for even a moment - the fact that this movie actually directly takes on the pandemic, and finds something worthwhile to say, or at least manages to express some emotional clarity about the whole thing in a way that feels earned, and honest.........I repeat, THIS CAME FROM THE EXTREMELY LOUD PERSON, AND IT DOESN'T SUCK SOMEHOW!!!?!?!?!?!!! I am truly bamboozled to an extent that I have rarely been bamboozled before.

I'll fully admit that I went into this knowing it was from the "CGI Tom Hanks falling from the Twin Towers" guy and he was making a COVID movie, and I adjusted my expectations accordingly (which is to say, I went in expecting to tear this thing a new asshole), which made the first several minutes of this movie really disconcerting. It's an unbroken shot that lasts for a good long while, in which James McAvoy and Sharon Horgan give dual monologues directly to the camera about what a bitch it is to be stuck with someone you hate in lockdown. Now, maybe it's the Scottish/Irish accents at play, but I wasn't put off by the COVID talk like I have been in other failed attempts to tackle the current situation (Locked Down especially was genuinely painful in this regard). And maybe it is 99% the accents doing the heavy lifting, but I also think the script is more on the ball than you'd expect, and the direction is good enough to basically hang back and let these actors do what they do...and I've got to take a moment to acknowledge that I've just gone and complimented the CGI Tom Hanks in 9/11 filmmaker for doing good direction, and what is life anymore.

Certainly the format helps: this is one of those overtly stage-y, "theatrical" films that actually pulls off its theatricality really well. It feels like they just filmed a stage play, but in a way that really works. Also, with the rise of Netflix I've been using the phrase "TV movie" as an insult more and more, but I actually think this was legitimately a TV movie? Like, a movie they showed on the BBC channel back before it made its way stateside. And I say this because it totally plays to its strengths as a TV movie, taking advantage of its minimalist resources to really highlight the intimacy of what's going on. Like I said, not all of it works; there's character stuff in the back half of this thing that just did not play, and emotional resolutions that frankly did not match up with what had been established before. But there are enough real, honest, emotionally powerful scenes in this thing that that almost doesn't matter; the mere fact that this movie manages to find some semblance of catharsis from a subject matter I assumed I'd never see done successfully in a movie (certainly not a movie made while said subject matter is still ongoing) is worthy of genuine note. And fine, I'll say it; they're better at breaking the fourth wall than Deadpool.