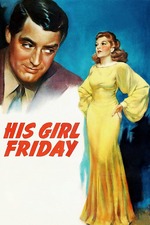 Don’t watch His Girl Friday if you’re feeling even a little bit sleepy, or else you’re gonna miss an entire chapter’s worth of lines. It’s almost as if the film has the compulsion to keep the dialogue flowing continuously for as long as possible, and the novelty/fun wears off pretty fast. But hey, it’s not as if the movie isn’t still enjoyable, it very much is and it excels when every single plot thread/running joke ties itself up in a pretty little knot. As far as I can remember, it happens a handful of times in the entire runtime, but each one is worth watching.

Kudos to Cary Grant, Rosalind Russell and every other cast member for keeping up with the rapid-fire dialogue pace this film demanded. Whether it deserves the classic status it enjoys is something I’d rather not talk about, but I will say that His Girl Friday is a perfectly harmless, neatly written and sometimes misguided “comedy” movie (which is actually a rather harsh satire on sensationalist journalism). It’s definitely the sort of movie you admire more than you find hilarious if you’ve got a similar taste in humor to mine, but I have to say some of the pure verbal gags work like a charm.