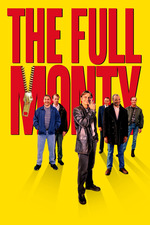 What does a male provider do when he can't provide anymore? Strip!

That's the plot of this British comedy in its entirety, but I'm OK with that. The movie is short and sweet. When you've embarked on the Best Picture project, watching all the movies that have ever received an Oscar nomination for Best Picture, you have to sit through a lot of ponderously themed films that take their time getting through their three-hour running time. But not here.

And yet, I'm not at all certain this movie deserved the Best Picture nod that it got. I've absolutely nothing bad to say about it. It's delightful and winning. But it's also slight and completely formulaic, even if it does what it sets out to do without a hitch.

The argument can be made that the film attempts to explore what is meant by male sexuality, and how it so sharply differs from the female (except when it doesn't). Certainly, that's more interesting than its takes on breadwinner emasculation, which are routine.

Although Robert Carlyle leads the cast, as well as a motley crew of down-and-out guys passing the time in south Yorkshire, I was most taken by the performance of a buttoned-down Tom Wilkinson, seen here just before his film career took off in the 2000s.

"Magic Mike" (2012) gazes upon the glitzier side of the male stripper world, and is nicely done. But this is the movie with the heart.