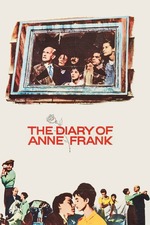 It would be unseemly to say that I enjoyed watching this film, given its subject matter, based on a true story about a Jewish teenager who was killed in the Holocaust (along with almost her entire family) after hiding in an attic in Amsterdam for more than two years. I didn't enjoy watching it, because who does? But this was a really hard watch for me, and not for the reasons that should be critically acceptable.

Yes, the movie is long at three hours. But it's not just long --- it drags. There are a couple of scenes between Anne and Peter (Richard Beymer, who would play Tony in "West Side Story" a few years later), all dewy longing and talking around things and eventually kissing, that go on and on and on. And on. There are several scenes of tension that are nicely played --- will they be discovered by the Nazis? --- but more than are needed, and they slow to a crawl as well. The film is also intensely claustrophobic, although it obviously has to be. Noting how the story ends, I watched while all the time dreading how it was going to end. I'm not wishing for a happy ending, of course, this movie has to be a downer. Unfortunately, you know that going in.

For more than 60 years now, Millie Perkins has been raked over the coals for not being an angelic, superhuman, finger-to-God Anne Frank, but instead playing her as just a reedy, immature girl. That's always been an unfair criticism. Joseph Schildkraut is wonderful as the patriarch of the group, a true leader and good soul. Alas, there are also several thoroughly unlikable characters sharing the attic with him, from Ed Wynn, as a snob I wanted to toss back out into the street, to Shelly Winters. I couldn't get pass Winters' awful hair. Really awful hair, which she managed to retain throughout her career.