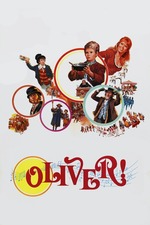 Despite the fact that 1968 was one of the most tempestuous, radical years in American history, this was the movie that won the Oscar for Best Picture from that year. Of course, points like this are always kind of bogus; it takes a long time for a film to get made and released, so unless a movie is especially prescient there's going to be something of a cultural time delay. And Hollywood did eventually catch up to the 1960s. But still, "2001: A Space Odyssey," another 1968 release, wasn't even nominated for Best Pic. The Academy was particularly out of touch at that time.

This musical is a very loose adaptation of Dickens' "Oliver Twist" and not nearly as dark, although it's dark enough. And I have to give it credit for being a musical with LOTS of music and dance, and two or three of the songs are memorable. Granted, some of the heavily choreographed numbers are a bit much. The prancing policemen, for instance, were alarming. But this is an ambitious film with impressive production design. It tried very hard to keep my interest and I have to give it credit for that.

Alas, it didn't really succeed. The story is not very interesting or involving, while the young actor playing the title character is a bit of a blank, and the big villain, Bill Sykes (Oliver Reed) is monosyllabic. Ron Moody's Fagin is easily the best performance in the movie, while Shani Wallis is noteworthy as Sykes' girlfriend. After he slaps her to the ground she sings "As Long as He Needs Me." That song might be written a little differently today.