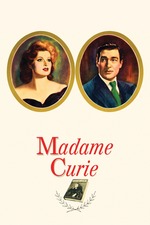 She BLINDED him! With SCIENCE! But truthfully, they blinded each other, Madame Curie and her husband, Pierre. While they do fall in love, I guess, and marry and raise a family, none of that can compare with their passion for the chemical element radium. RADIUM! They must separate it from barium, because then it will be separate from barium and by itself and there it will be, after years spent boiling down huge vats of gooey pitchblende and pouring the remainder into something like 5,647 tiny evaporating bowls. Their passion for this quest is bottomless, AS DEEP AS ANY OCEAN. Yours may not be, unless you really have a thing for making maple syrup. Same principle there, but more tasty.

This biopic stars Greer Garson and Walter Pidgeon, in just one of the nine movies they made together. So yes, they get on well, and the early courtship scenes, all awkwardness because they're SCIENTISTS devoted to SCIENCE, are nicely played. This movie proves, however, that Hollywood has always had a thing for dull biopics. By the time the film reaches its final scene, crushing dullness is the order of the day.

Truth in advertising -- despite what you see on the poster, Pidgeon dons a pointy beard in the entire film, while Garson rarely lets her hair down, so as not to get it stuck in the gooey pitchblende.