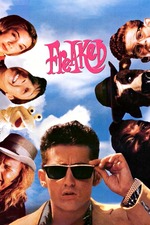 This film is not unlike the garage punk song that plays during the opening credits. It's comes at you fast, and it comes and goes without ever threatening to overstay its welcome.

There isn't a frame or a word that isn't part of a punchline, and a good amount of the time it really works. The first half hour or so especially just starts firing off joke after joke, and some of them are fucking hilarious. Randy Quaid is easily the most powerful comedic force at work here- clearly relishing the opportunity to dive headfirst into the absurdity. Brooke Shields and William Sadler had some fun moments as well.

The other main attraction of the film is the makeup and practical effect work, and it's expectedly great for the most part. The second half relies much more heavily on the effect stuff, especially the "climax". I do have to say that I prefer the pace and tone of the first half, or maybe it's just because it was funnier.

The humor reminded me at times of a more bizarre Simpsons and an equally bizarre Gremlins 2. The best way I could describe this movie is that it is something that your uncle with the loudest laugh in the family would tout as the funniest movie of all time, and when you watch it with him- you can kinda see why.