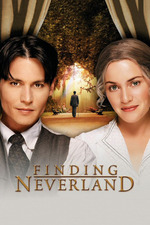 It makes sense that Marc Forster directed a Peter Pan movie because he did Quantum of Solace, and if you think about it James Bond is the Peter Pan of sexy spy movies. Also, like this movie, Stranger Than Fiction is about the Writer's Pain so that's Marc Forster's top three best movies I think.

"James, how does anyone stay young forever?"

The editing is really great. Matt Chesse, who also edited Stranger and Solace, often cuts right before a moment is realized, a little ahead of time basically, and it keeps up a sort of frenetic pace. The problem here is that this isn't an action film. There are moments of very deep conversation but they're jarring to watch, because we want to watch some action! The cuts are very fun to watch but the result is tepid, unfortunately, which is similar to the problems of Quantum of Solace, now that I think about it. Matt Chesse is a good editor who needs more projects to work on.

Freddie Highmore is so good

A liked these reviews

A is using Letterboxd to share film reviews and lists with friends. Join here.