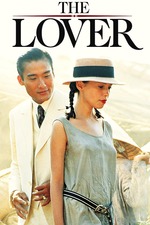 There's a really interesting scene about an hour and 10 minutes in where the Leung, March, and her family meet and go to dinner. They all treat him like he's less than nothing, even though he's paying for everything. The mother breaks down crying at a dance while her oldest son makes out with a floozy and her daughter and younger son dance rather provocatively. Later, Leung's character essentially rapes March's who then makes him pay her, but in a way that makes them both feel ashamed.

Aside from that, The Lover explores some fairly mundane themes on love, lust, and the loss of innocence. The whole picture could be improved with less of a fetishization of March's 15-year-old character. Though the film does attempt to empower her through voice-over, director Jean-Jacques Annaud and DP Robert Fraisse can't seem to help lingering their camera over her like she's some kind of forbidden Playboy Playmate.