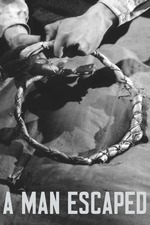 Bresson starts this film by telling us that he hasn't romanticized any of the actual true events, and it's true. A man escaped is a story about a person who plans an escape which seems impossible at first and only becomes more impossible as time passes . Since we already know the ending (I mean... Look at the title), what's left is ultimately a film about the power of patience and perseverance... Bresson grabs each small, minute, harrowing task and plan and drags it out, making us feel every. Single. Second of it. Stuck in a cell with the main character without ever giving us a different perspective, we see what he sees as he prepares for every obstacle in his way. It's claustrophobic, and at times incredibly intense. We doubt the main character, even as we watch him rarely doubt himself.

Bresson does it again... I mean, how do you make a film that spoils itself in the title, and still make the audience doubt the climax will really come? It's a feat that he not only pulled off; He made it look effortless.