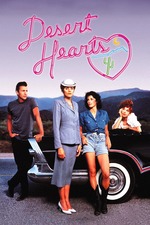 it's set in northern nevada in the '50s, which is where and when my mom was born, and it's about lesbians falling in love on a ranch and in other liminal spaces of the desert, mountains and sand looking volcanic in the psychedelic sunsets, casino interiors entombed in a queasy veil of cigarette smoke and country western music, one woman defiantly out and determined to establish a life for herself, the other closeted, burrowed so deep in what she thinks she should be doing that she has little-to-no idea of what she actually wants, which is why, even though this movie isn't about my life—i grew up in las vegas in the '90s and only fell in love with reno when i attended college there in the late '00s—it felt at every stage as if i were watching my own autobiography, or as if the movie were tapping into some ancestral narrative i never knew i had