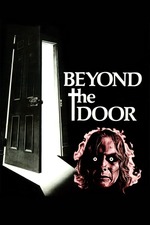 My least favorite of the Beyond the Door trilogy is still a great piece of trash in its own right. A shameless Exorcist knockoff with Hayley Mills’ sister spewing pea green soup except this movie has no shame in admitting how shameless it is because that’s followed by a shot of a kids lunchbox with an actual can of Campbell’s split pea soup! Gotta love it.

The cast is particularly memorable to other Italian horror fanatics. The relatively benign little boy in this movie would go on to star in the “name only” sequel as the most annoying Italian horror movie kid ever after Bob from House by the Cemetery. Richard Johnson plays a washed up drunk so well I just don’t know him as anything else and he still has some kind of raw magnetism thing going on. What can I say, I have a type.

Am I going to pick up the Arrow blu now that this has floated back into my consciousness? You bet your ass I am.

Also, how badass is the director’s name: OVIDIO