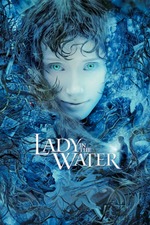 Ahh, yes... The beginning of Shyamalamadimadong's downfall. A film so mindblowingly disfunctional that I can't wrap my head around the fact that it was financed and distributed in wide release by a major studio. It truly does seem like my boy M. Night just came up with a core concept that he liked and then made up the rest of the plot as he went along. And, well... that core concept feels like something a film student would come up with and that would make them fail their class.

One star for Bob Balaban. I thought he was by far, unironically, the funniest character in a film that otherwise doesn't seem to understand comedy very well.