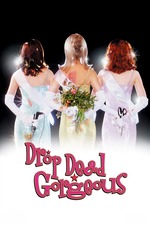 What a bizarre hybrid of giallo murder mystery, mockumentary, and Twin Peaks-esque, Weirdsville U.S.A. elements, which, like the creature in Splice, surprisingly bangs(?), elevated by a smorgasbord of nuanced little turns from a massive cast of talented people, including Kirsten Dunst (the beating heart of the thing, and a tap dancing mortuary cosmetologist!), Allison Janney (who nicks every scene she's in), Denise Richards, Kirstie Alley, Amy Adams, and Brittany Murphy—whom I only knew from Don't Say a Word, and whose delivery of, "I'll never tell..." has intermittently haunted my thoughts since 2001. What a phenomenal talent she was, only appearing briefly here, but eliciting some of the biggest laughs and, coupled with Dunst in one scene, moving me to tears, which I should clarify has more to do with her ability, and less to do with me getting softer by the minute (though I absolutely am). Pretty sure Janney even hooks up with one of the Mandylors in an uncredited role. Bonkers... Anyway, this is alternately shocking and funny, and with a few admittedly glaring exceptions in the form of dialogue toward Will Sasso's character (he's here too, by the way), plays relatively OK today for a teen comedy from the '90s, which typically age about as well as those foam rubber latex Teenage Mutant Ninja Turtles costumes.