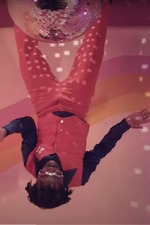 Adejuyigbe's autumnal vision reaches its apex. The glorious setpiece that's at the center of this film would have been enough to top any of his previous five Sept. videos -- Adejuyigbe dances across the walls and ceilings, channeling Ritchie and Astaire -- but 9/21/21 is about the subtext, which is: this is definitely the last one.

9/21/21 breaks with the previous five films -- which had no spoken lines and always opened on a scene staged at a house -- by opening on a bar scene just before midnight. The lubricated dorm room conversation establishes that Adejuyigbe's September Guy character believes in the conspiratorial interpretation of the ending of Grease that reads Danny and Sandy taking flight in Greased Lightnin' to mean that Sandy is dead; the brief nightmare sequence that follows reveals the anxiety and mental strain of producing a September video each year, a burden no less real for the fact that it is -- enormous and enthusiastic audience aside -- ultimately self-imposed.

When he surrenders, one last time, and the song begins, for the first time, it's not a boutique remix, but simply the studio version of Earth, Wind, and Fire's iconic anthem. When he escapes through the window of the 9/21 room and emerges in Willis Wonderland -- the whimsical estate of the late Allee Willis, one of the co-writers of "September" -- to be accompanied by, for the first time, other dancers, professional dancers, it should be obvious: this is a valediction.

There's no way to trump this film, he's left himself no other card to play. The only thing left to do is to leave -- which he does, with a friend impersonating Danny Zuko, in the passenger seat of a Greased Lightnin' lookalike that flies into space, over a waving crowd holding up signs spelling out "BYE". This, of course, pays off the foreshadowing in the opening of the film and hands us the interpretation of this end: Adejuyigbe is killing off September Guy.

It's in virtually every frame of the film: this is it, the last one! It's over, finally. Any sentient person should be able to see this -- and that's before a post film sequence in which Adejuyigbe announces that the fundraising gimmick this year is that he's selling a painting of a retired Sept 21 jersey hanging in the rafters and literally says he won't be making more September films, and before a credits sequence that has the current members of Earth, Wind and Fire saluting him for his good work.

So how is it that there are people in the comments on YouTube, Adejuyigbe's Twitter mentions, on Letterboxd even -- trying to guilt and bribe and cajole him into making more September movies, or baldly asserting that he isn't serious, or will come to his senses?? Totally baffling and these people should shut up.

In any case, it's a wonderful farewell, and I'm thankful for it, along with the rest of them -- a pure, unearned gift.