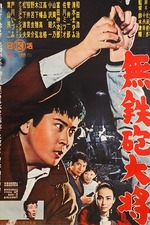 An early hidden gem by Suzuki about a teenage karate practitioner whose widowed mom is stuck being the mistress to a local yakuza boss. When the yakuza boss moves to discard the boy's mom and casts a lear at his would be girlfriend, the catalyst is set for some yakuza VS karate kid action.

The whole film is infused with a madcap sense of humor that keeps things from getting too heavy, and moves at such a quick clip as to never drag during its brief runtime. Interestingly, this is one of those earlier films where you can see Suzuki inch towards his own unique style that eventually fully develop during his last few years at Nikkatsu. '61 usually isn't my favorite year for the director, but this comes off as a midpoint between his conventional delinquent films and his latter-day "time and place are nonsense" freak outs.

It isn't as deep or well-made as some of Suzuki's more famous films, but it's a lot of fun and the sets create this great atmosphere you just want to hang around in.