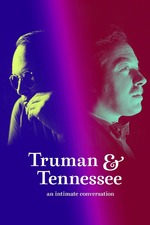 It's back to the Film Forum for me as I saw Truman & Tennessee there today, a recent documentary by Lisa Immordino Vreeland that juxtaposes the lives and careers of Truman Capote and Tennessee Williams. Both men were among the literary superstars of the mid-to-late twentieth century, the former earning widespread acclaim for such books as In Cold Blood, Breakfast at Tiffany's and The Grass Harp, while the latter penned numerous notable (occasionally Pulitzer Prize-winning) plays, including A Streetcar Named Desire, Cat on a Hot Tin Roof and Sweet Bird of Youth. Although the Intimate Conversation subtitle implies an exchange between the men themselves, the dialogue is actually between each writer and one of the two talk show hosts conducting interviewers, either David Frost or Dick Cavett. Arguably, the "conversation" is also between their respective artworks, comparing and contrasting the content of the authors' most famous stories, as well as the public's continued fascination with Capote versus Williams' critical fall from grace from the early 60s until his death.

Vreeland amassed an intriguing number of video clips, photos, diary entries, reviews and other research to give a sense of the writers at their various stages of life - there's something simultaneously fascinating and disturbing in the interviewers' obsessions with asking Capote and Williams, both openly gay, so many intrusive questions about their sex lives, inquiries that would likely not be posed to a straight audience - but two aspects of the documentary could have been done much more impressively. First, throughout the film, Jim Parsons and Zachary Quinto provide narration as Capote and Williams respectively, and while they do okay in those roles, the exaggerated Southern accents that they put on (even in Parsons' case as a Texan) can be a bit distracting when preceded or followed by the subjects' interview segments utilizing their own voices. Second, some of those narrations are layered over montages of, say, waves crashing on a beach, a breeze blowing through a field of wheat or a kite floating through the sky, a technique that feels pretty amateurish considering that this is not the director's debut (she has made Diana Vreeland: The Eye Has to Travel and Peggy Guggenheim: Art Addict, among other works). A more confident filmmaker would focus solely on the images, documents and related archival materials that are already interesting without all the melodramatic flourishes of stock footage. I do think some of my fellow Letterboxd reviewers are a bit harsh in their assessments, however, because the film probably seems weaker when viewed on a laptop during virtual cinema festivals (I mean, wouldn't just about anything?) than when I got to see it on the big screen.

BONUS
This next part isn't actually connected to Truman & Tennessee, but in the spirit of Capote and Williams' on-again-off-again friendship/rivalry, I relay this story with some requisite snarkiness.

2020 was supposed to be the time of my ten-year college reunion. Mind you, I don't think I ever seriously considered attending such a gathering, given that Midwood High School - garbage institution that it is - has no interest in reassembling its former students; rather, a Facebook event was started by several people who are already in the same general friend group, so they figured why not ask more grads to get together? Well, today I found out apparently this coming Saturday is the rescheduled date for the fetid fête, which has been arranged at 9 PM (old person alert: that's way too late for me) at a bar called the Frying Pan, described as a "Historic Floating Barge and Lightship" on Pier 66 in Manhattan. In other words, it's the furthest you can go past 12th Avenue without literally taking a dunk in the Hudson River. No thank you! Not only is that area totally unreachable by non-car public transportation - any way I look at it, I would need to take at least two trains and a bus - but I have zero urges to relive high school, the worst time in my life, with people who didn't get to know me back then. Icing on the cake: I don't drink, by choice. (I'm fun, I swear, just not in this kind of setting.) Anyway, now I've remembered something else, so as long as I'm reminiscing...

My senior year in high school was a lonely experience. I knew a lot of people and even more seemed to know me, but I didn't have many close friendships. Other than my younger stand partner in the school orchestra, a class that I took part in during all eight terms - the last seven of which, I was the concertmaster - there were no other students in whom I confided on a daily basis. Aside from that 45-minute period when I could enjoy the feeling of camaraderie through playing music, my school schedule consisted of silent note-taking. (The most depressing thing you'll read all day: the reason why I chose to stay in the orchestra through to the end of the year was because I knew I would be forced to play at the graduation ceremony, and that was an acceptable alternative to sitting with the rest of the graduating class, given that I didn't have a clique, or even one specific good friend, to pair up with at the event. In the orchestra, at least, I had a place. I was Somebody.) But all of this is a lead-up to the actual anecdote!

In June of that final semester, there was a day for seniors to rendezvous and sign yearbooks. Since Midwood doesn't have a field of its own, the students had to trek over to the football field at James Madison High; as I've established, however, I didn't exactly feel warm and cozy about my fellow kids, so I opted to go to my classes. Without 98% of the student body in attendance, of course none of the teachers bothered with instruction, but the one period that stands out in my memory is AP English. The course was taught in what used to be the school library - during my senior year the entire book collection moved to an all-new building primarily devoted to science studies; I never went there much - and I loved the cavernous, echoing, windowless atmosphere, so distinct from the usual boring classrooms. Instead of rows of desks, four long tables were fit together in a square; there was something nice about that huge empty expanse of carpet in the middle. And so, there, in the bibliothèque-turned-workshop, I brought out my violin and played a couple of pieces, Massenet's Méditation from Thaïs from memory and a probably mediocre attempt at the first movement of Mendelssohn's Violin Concerto in E minor, from the sheet music. Just me, a properly appreciative Mr. Milkman, and Nick Macaluso, who walked in late with a copy of The Metamorphosis and, unsurprisingly, never said a word to me. Isn't it funny what the human brain holds onto after so many years? Just a fragment of a day eleven years ago, but it tells me exactly who I was and still am: lost and alone in a crowd where I feel I don't fit in, but give me a wide open space to do something that I am totally comfortable and confident in accomplishing, connecting with just one or two people, and I thrive. Food for thought.

P.S. Coming full circle, after I returned home and talked with my mom about Truman & Tennessee, she dropped some real gossip direct from her former piano teacher Louis, a delightful French octogenarian whom she has known since the 60s: apparently he once saw Dick Cavett and Leonard Bernstein hanging out at the infamous Everard Baths. You heard it here first, folks!

P.P.S. If I've said it once, I've said it a thousand times: call me when whoever runs the Midwood alumni achievement display case in the school finally replaces Annie Hall and Without Feathers with the magnum opus known as Making It Big.