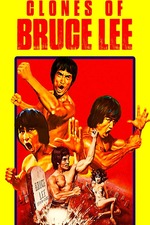 Yes, there exists a movie called The Clones of Bruce Lee. A movie wherein a mad scientist creates clones from the DNA of the recently deceased martial arts film star with orders from the SBI (Special Bureau of Investigations). This is as stupid and as glorious as you might think.

So a little context to whatever this is. The Clones of Bruce Lee is actually a part of one of the strangest pieces of film history I've ever come across: Brucesploitation. See, after the death of Bruce Lee in 1973, many filmmakers wanted to capitalize on his death by making a slew of Bruce Lee-esque films with Bruce Lee impersonators in the starring role. Yes, an entire film sub-genre dedicated to banking on the death of one of the action genre's most iconic actors. If you think that is shameless I will remind you that there's an entire exploitation sub-genre dedicated to Nazis. Now I will admit, I have zero knowledge about the Brucesploitation craze other than its odd existence, but I think it's safe to say nothing will top what has been called, and I'm not kidding you, the Mount Rushmore of Brucesploitation Films. And I can understand why.

The Clones of Bruce Lee stars Brucesploitation mainstays Dragon Lee, Bruce Lai, and Bruce Le, as well as actors brought on from actual Bruce Lee movies like Jon T. Benn (Way of the Dragon) and Bolo Yeung (Enter the Dragon as well as other Brucesploitation flicks) in a movie so unbelievable you'd swear it was some sick joke you dreamed up. I also wanted to point out there's a Bruce Thai, who plays Chuck Lee, who I don't think is a Bruce Lee clone, but they dress him up to look exactly like the other clones, so there's something confusing to try and understand while you watch this.

There's no way to review The Clones of Bruce Lee. It almost defies being analyzed. Because to delve into the madness that is a movie where Bronze bodyguards are defeated by digesting poisonous grass means delving into insanity itself. The basic plot synopsis itself is worthy of a Razzie, but once you watch the full 87 minutes you'll discover that it is far more pants-on-head looney than you could ever imagine.

Of course there's no information on the making of such an obscure oddity, but after watching this I almost have to believe my theory that this was an intentional comedy. There are weird genuine comedic elements in this that made me wonder if this was made to be a parody of the Brucesploitation craze. And I know that sounds obvious, but I've seen goofy pieces of trash that were supposed to be taken seriously. Despite the fact that Robot Monster contains an alien in a gorilla suit the director almost killed himself over the abysmal reviews. But because there are moments of intentional comedy in this it does seem like the filmmakers and actors were in on the joke.

If you want a truly unreal experience you will never forget, there aren't too many movies I can recommend, but The Clones of Bruce Lee is certainly one of them. This deserves to live with the likes of Plan 9 from Outer Space and Troll 2 in infamy. Because I've watched a lot of bad movies in my short time on this earth, but none of them were The Clones of Bruce Lee, a movie so bonkers it's kind of genius.