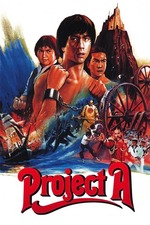 Comparing this to Sammo Hung's Wheels on Meals released the next year in 1984 shows some stark differences between Sammo as a director and Jackie Chan. Both are swashbuckling adventure films with ridiculously athletic fights and stunts, slapstick comedy and a real obsession with beating the hell out of Jackie Chan. Both star Chan, Sammo and Yuen Biao. Sammo's film though tells a real story, about immigrants in Barcelona (granted, a Barcelona where everyone speaks Cantonese) that find themselves caught up in what we slowly realize is a fairy tale: three musketeers rescuing a princess from a castle. It's packed with purely visual humor (the split screen gag in the opening moments, Sammo's variety of hats and Yuen's entire wardrobe) and moments of sublime absurdity (Wu Ma's "guy who thinks he's a clock"). Wheels on Meals is a true ensemble film, with Yuen and Chan sharing the lead and Sammo in support, like he is in almost all of his films from this period.

Project A, however, is a Jackie Chan starring vehicle all the way. There are long stretches of the film where the other two Little Fortunes are entirely absent (Yuen has a large role as a rival cop in the first half of the film, then mostly disappears, Sammo pops in and out for some scoundrelly awesomeness). Chan is the prime mover of the plot and the true hero of a very thin story about Hong Kong's Coast Guard fighting a gang of pirates at some very unspecific time in the past. The humor is even more broad and less inventive, wild overacting (even by Hong Kong standards) and literal pie-in-the-face jokes (well, spaghetti-in-the-face). The plot barely makes sense, little more than an excuse for fights, sketchy gags and chase sequences (and of course a contextually nonsensical but nonetheless kind of stirring patriotic dressing-down Chan gives his British superior). The actions scenes are, of course, amazing: the coordination of the fights with Chan and Sammo (side by side, for the moment) is unbelievably fast and intricate, and these are some of Chan's most famous and inventive chases, especially the central bicycle chase, with Chan's exasperation toward the useless female lead (another unfortunate Chan trope) and culminating in a Harold Lloyd homage. But even the finale becomes overcrowded with extras and effects. The climax of Wheels on Meals gives each hero a highlighted fight, we see the differences in their personalities reflected in their fighting styles: Sammo's silliness, Yuen's gracefulness and speed, Chan's masochism. In Project A, the climax is a series of mistaken identity gags (which are, to be fair, pretty funny) followed by an all-too-brief mass fight punctuated by the repeated use of hand grenades (some terrific falling stunts by Sammo here). The three unite to gang up on the villain Dick Wei (terrific here, wish he had a bigger part), but even in this fight, it's technology that wins as much as anything else.