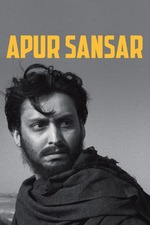 The World of Apu

A perfect, transcendent ending to Satyajit Ray's Apu Trilogy. I'm glad I watched all three films back to back in one day. It made this movie so much sweeter, and it's already one of the sweetest films I've ever had the pleasure of seeing.

The World of Apu came out in 1959, but it is so ahead of it's time it could be released today without any changes or enhancements made to it. It's that good. I cannot believe Satyajit Ray had the vision that he did for the Apu Trilogy, nor can I believe he made it come to life in the way that he did. This film really speaks to the human condition in a way most works of art never do.

I personally connected with Apu in a way I never had before in this flick. Probably because he's a writer struggling to live. His journey into reluctant love into true love into loss into reluctant love and back to true love completes both the circle laid out in Apur Sansar and the circle laid out by the whole trilogy. Maybe that's where Christopher Nolan got some of his inspiration from? Pather Panchali is one of his favorites!

The soundtrack is amazing. The use of trains is SO GOOD in this trilogy. Locomotives mean so many different things: journey, death, safety, reconciliation...I wish I could pick Satyajit Ray's mind!

The performances are insanely good. Every character feels deep and fleshed out. Apu and Aparna feel like real people I've met. Even Kajal was insanely good!

This movie and this trilogy is a masterpiece, warts and all. I can't wait to show this to my friends. Step aside, Bollywood, there's a new sheriff in town!