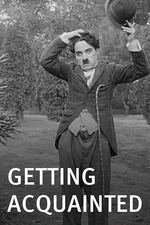 Although this was released two days before His Prehistoric Past, that film was actually completed almost a month before this, technically making Getting Acquainted Chaplin's last short for Keystone Studios. It would also mark the last time he'd work with Mabel Normand and many of the others on the roster of Keystone players.

It's a shame the short wasn't a better one to mark the occasion, but perhaps it's apt in a way, because it's symbolic of how Chaplin was treading water at Keystone and had outgrown the studio. It's yet another "park comedy", which was apparently a genre unto itself back then, with more attempted wife-swapping from Charlie and Mack Swain, who end up falling afoul of the law.

The short was filmed in a single day, which isn't at all surprising when viewing the finished results, and I found it amusing that on Chaplin's official website it's commended for avoiding "such devices as brick throwing, pie throwing, or a finale with everyone falling into the lake". High praise indeed.

One highlight of the film is when Charlie's wife escorts him from proceedings by literally grabbing him by the seat of his pants.