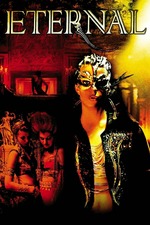 In Eternal we follow police detective Raymond Pope, as he investigates the disappearances of many girls, including his own wife, linking them to the recent arrival of the mysterious Elizabeth Kane in town.

This film is one of many based on the story of the infamous Blood Countess, Elizabeth Bathory, and one of many to portray her as a vampire. I didn't have much expectations for this, but even though with several issues that end up compromising the film Eternal is not the absolute trainwreck I thought it could be.

The films starts off as a competent neo-noir involving vampirism. We get introduced to the main characters: Elizabeth Kane, a true sexy vampiress femme fatale that will bring ruin to men; Raymond Pope, a sexually unfulfilled and tormented man with weird fetishes searching for his missing wife. The sexuality is definetely the best thing about the film; it's heavily portrayed, but never vulgar - in a very Basic Instinct way -, and always used to explore our characters. The nature of Raymond's affair with his partner's wife, the importance of Elizabeth's seducing of her victims, the sexual tension between her and Raymond, amongst other things. It helps to explore some corners of the characters' darker desires, estabilishing that neither of them is solely good guy nor a bad guy, they all have shades of grey.

The two leads deliver suitable performances. While Conrad Pla falters a bit as Raymond, Caroline Néron makes a great Elizabeth Bathory. She definetely steals the whole film with her strong presence, she's completely dominant over the characters and the audience. The rest of the cast, though, is not very good.

The direction is a lot more solid than I expected, the photography serves the film right creating a profound darkness over its entirety, the set decoration certainly deserves praise, and the soundtrack works well. Where Eternal falls short, though, is in its script. There are some very good dialogues, then there are some cheesy ones - I also felt a bit of overswearing. Some characters are criminally disposed of. Some resolutions feel a little too easy. The film could still pass as an enjoyable flick with most of these flaws, but it completely falls down in the third act. A sudden radical change of scenario, a poorly made backstory development, and a lazy-ass half-baked ending that has the whole movie come tumbling down.

In the end, Eternal has a great story with decent characters, but it's ruined by poor screenwriting.

The world is in desperate need of one true great Elizabeth Bathory movie.