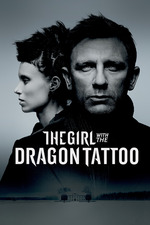 A bleak, cruel, unforgiving story about the resilience of women despite the bottomless depths of misogyny so horrifically everpresent in the world.

It's also something of a superhero story.  If you call Blomkvist the Lois Lane to Salander's Batman (apologies for the mixed superhero metaphor, but there's more coming).  Blomkvist is an able journalist and can handle himself generally but he's always a little out of his depth until Salander shows up to save him.  And Salander is as much a superhero, slowly discovering her purpose, in the same way that Gosling's Driver was.  Her scorpion jacket costume is black leather and a Dragon Tattoo.  Her origin story is steeped in unimaginable horrors that we only ever see a fraction of, but that fraction is more terrible than most people's entire lives.  And perhaps most crucially for this comparison (and to throw another hero into the mix), after Salander saves the day, saves Blomkvist, learns a few things about herself, and opens up, she still doesn't get to be happy.  She doesn't get to find her solace, because like say Spider-Man (never able to find a happy medium between his two lives) or any other hero, she's been blessed with the ability to help others, but cursed with the inability to help herself.  She will never be happy because she has a job to do and she can't fit in for her calling.

This is easily Fincher's harshest, most difficult film to watch, but also somehow his most beautiful.  The palette is ice cold, the landscapes stark.  The score is similarly but evokes the cold, tragic beauty of winter.  Over every harsh scene, every act of violence is this score that whips between violently windy and softly snowy.  Combine that with Rooney Mara and Daniel Craig's best performances, accompanied by two exquisite supporting roles in Plummer and Skarsgard, not to mention the rest of the perfect ensemble.  Throw in the slowly unraveling mystery that never lies to you.  If you were paying attention, you'd see that Fincher never covers up the killers identity.  It's so clear in the flashbacks upon rewatch, but like our leads, we are deceived by the nature of the violence, the depths of brutality, the false faces and multi-layered beliefs amongst the awful family, and the ice cold compassion they see and so desperately need in one another.

And through all that frigid beauty, he tells a horrible, poignant story.  A story about a family with evil in its roots, about two broken people looking for answers in photos and one another, about the tragedy of truth.