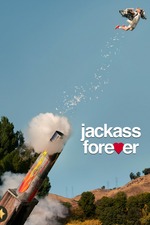 This was my first time seeing the Jackass guys on the big screen, and for someone who grew up watching them for so long, it was the perfect “final” outing. I haven’t laughed (and winced) this much in the cinema for quite some time.

Now within the midst of a pandemic; Jackass Forever required some chaotic genius and a return to the basics in order to continue the shocks, laughs and gags. The classic days of backyard stunts and pranks are back as the team reassembles, with a fine bunch of new (and younger) members to join them. That does include a LOT of genitalia. What makes Jackass really work is the reactions from everyone on site, so it’s great to see them capturing that again. I love the chemistry everyone has with each other. There’s a true bond present and that now lives on with the newbies. But let me tell you this; Ehren McGhehey CARRIED this film. He did not hold back for anything. An under-appreciated member finally getting his time to shine. Knoxville and Steve-O have their fair share of crazy stunts as well, and the snappy wit that Pontius always brings is still brilliantly intact.

It is missing Bam Margera, though. He’s there for 30 seconds and he was cut-around quite a bit. My hope is that he gets the help he needs and can give us some more laughs in the future. Speaking of, there’s a confirmed 4.5 on the way, and to be honest, I don’t think this is the last one. I think we could see them passing the torch to the newbies further in either another film or a series.

Jackass Forever was exactly the kick I needed and I can’t wait to watch again and see more footage in the additional 4.5 when it drops. I’ll end this “review” on a potentially unpopular opinion, but this is way better than Jackass 3D and has the best opening sequence for a Jackass project, period.