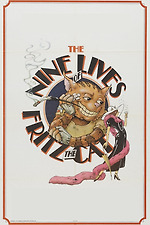 I didn’t even know this movie existed until today. Watched it for free via Amazon Prime, and still felt ripped off. Nine Lives makes Bakshi’s shambolic original look like Studio Ghibli or Pixar.

The framing device for this series of vignettes highlights the fundamental problem with the character: he’s just an asshole. Fritz is no longer a naive college kid in over his head, but an explicitly racist, aimless deadbeat with a ball & chain wife and kid on welfare, whose only escape from a life of poverty consists of weed-fueled fantasies that reveal an equally impoverished imagination.

The satire is toothless, even compared with its predecessor. Fritz the Cat played with Nazi imagery to highlight the souring of the Age of Aquarius into pointless violence in the name of revolution, with simpletons led by charlatans. The Nine Lives of Fritz the Cat, being built around dream sequences, substitutes a World War II-era romp with Adolf Hitler as a closeted homosexual. That ham-handed approach typifies the film. It has nothing new or interesting to say, only “shock” value that might have upset the squares and straights in 1974, but comes across as deeply lazy today. It also revisits some of the most potent (and racially tinged) material from the first film, in a way that cheapens the impact of that material.