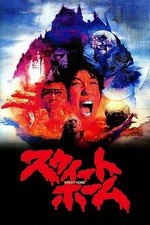 Veteran Japanese horror writer/director Koyoshi Kurasawa(PULSE[2001],CREEPY) succeeds in making SWEET HOME a chilling on-screen experience in the manner that he keeps the perfect balance in building up the film's characters and their relationship with each other while displaying plenty of gory carnage(which include a body ripped in half and gorily melting people) that enables the film's on-screen horrors to be very believable amid the cast's strong performances that enrich SWEET HOME to being a vastly superior Japanese horror feature.

A video game version of this film was released in Japan during the film's Japanese theatrical release,with the film's trailer mixing in scenes from that very video game.

The recently released SWEET HOME(2020) bears no absolute reations to this film.

Guess What Happened to Count Dracula?