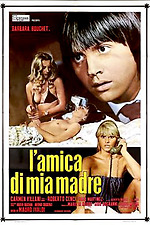 Despite featuring the likes of Roberto Cenci(who was the Eric Brown of Italy in the 70s) and Barbara Bouchet and teasing a lot of softcore erotica happening,this Mauro Ivaldi directed film actually features very little nudity and very little sexual antics as Bouchet playst he title family friend of Cenci's mother who stays at their home while Mama Cenci is on a vacation,with Cenci full of lustful feelings toward both Bouchet and his own girlfriend Carmen Villani,with both ladies displaying brief nudity past the 40 minute point of the film. Despite playing out like an Italian version of PRIVATE PASSIONS(the 1984 Sybil Danning outing),the film really isn't that bad as it does have its moments as Bouchet and her boyfriend attend a Haiti ceremony watching a young nude white gal sexing it up with a black guy,some of the main stars dancing at a local nightclub,and Cenci attempting his best to get it on with both ladies throughout the film,although he does land one of the ladies near the finale,only to it to end up in a bitter manner(ala THE LAST AMERICAN VIRGIN). Despite being soft in its premise,MY MOTHER'S FRIEND is still pretty much worth tracking down and watching,mainly if you're a Barbara Bouchet fan. With Raul Martinez(THE MASK OF ZORRO[1998],A MAN CALLED AMEN). Ivaldi reunited with both Villani and Cenci for EMANUELLE'S SILVER TONGUE.