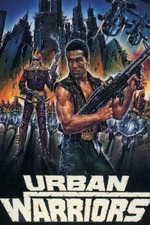 This movie was written (?) by idiots. Five minutes after a nuclear war knocks out the power in some sort of underground facility three guys emerge into a “post apocalyptic wasteland.” Why is this stupid? Because five minutes after they climb up out of their underground facility, already mad-max gangs are on the loose, everything looks like it’s been abandoned for years, and these mad-max gangs are already looking for ‘bone marrow’ from non-contaminated people. FIVE MINUTES AFTER THE BOMBS GO OFF. Because this is the stupid premise and set up, no, not that these guys were stuck in their underground base for a even a few months, but literally five minutes into the movie after the lights go out, and they find their way out of the base with flashlights this is the world already in existence out there in the ‘post apocalyptic wasteland.’ Worse than this is that it becomes boring, there’s no jokes, nothing is funny intentionally, or unintentionally and not a whole lot of action takes place. Fuck this movie.

Day of the Survivalist