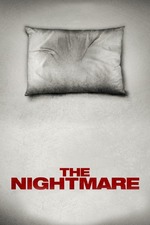 Rodney Ascher’s 'The Nightmare' tells intertwining stories of when sleep goes horribly wrong. And it doesn’t take much to throw off this fragile internal equilibrium. The docu-horror film profiles a group of people who suffer from sleep paralysis, a sleep disorder caused by the release of an extra hit of melatonin that renders a person — the victim, if you will — completely paralyzed when they regain their senses. For most, the paralysis quickly fades and all motor control returns at once. Hyperawareness of bodily functions is an unsettling symptom of this sleep disorder, the body horror inherent — synapses firing, adrenaline pumping, labored breathing. A subset of people who experience this disorder also experience intense, vivid hallucinations in this liminal stage between their sleep state and consciousness. Often, these people report visitations from menacing “entities” who torment them in their bedrooms (check out the preserved comments sections on reviews of the movie and you’ll see how pervasive this disorder apparently is). “This is the story of eight people and what waits for them in the darkness,” reads the movie’s opening title card, which is an elegant descriptor that hints at how 'The Nightmare' grapples with this rather abstract topic: it succinctly, evocatively states its focus, primes the audience’s horror receptors, and subtly ascribes a nefarious intentionality on the hypnopompic hallucinations.

Documentaries that depict horrors are a dime a dozen; those that function as bona fide horror movies, using startling imagery and tried-and-true genre techniques, are few and far between. 'The Nightmare' (neck and neck with 'Cropsey,' maybe) is one of the most often cited modern exemplars of movies that effectively crossbreed documentary and horror. Because 'The Nightmare,' at its core, is a documentary, it warps how these horror techniques and themes operate. As in 'Room 237,' his debut feature-length documentary, which presents various unorthodox fan theories surrounding 'The Shining,' Ascher — who has become a leading-but-divisive pop documentarian in recent years — doesn’t set out to pierce the bubble of his subjects’ world. He locks into their stories and worldviews and delivers their experiences, perspectives, and rationalizations wholesale. And he always filters it through a pop-culture lens, where fringe psychologies are tied to the movies we watch and the common images that rattle around in the cultural consciousness. Whereas 'Room 237' was an elaborate video essay, 'The Nightmare' gives over much of its time to haunting recreations of the waking nightmares its subjects describe, repeatedly, in detail. These visions range from hokey to genuinely chilling, and so Ascher reflexively inspects this fine line. As with many horror movies, your mileage may vary. But, with that documentary framework in place, 'The Nightmare' skirts a real-world plane of terror that other similar horror films — its namesake 'A Nightmare on Elm Street,' the wonderfully nuts Christopher Walken movie 'Communion,' and 'Insidious' are namechecked — can only pantomime.