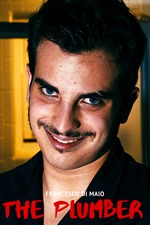 I don’t get it. There isn’t much of a story, rather it acts as a lecture from a man who feels wronged by society (I think? It was a little hard to understand what The Plumber was saying sometimes). In any case, I don’t think it really works on that level either.

It’s just quite frankly not my thing, it’s loud, it’s haunting, but never does it feel human enough for me to give a damn about. I’m not really impressed, even the cinematography is on the same level as Alex’s other short Date Night, which is good that he hasn’t digressed, but he really hasn’t improved either which is a bit tragic. But honestly I must say, I was expecting way more out of this. Also the horrifically gross shots of the toilet were ballsy, however it was a turn off for me. I respect this but was expecting a lot more.

Once Upon a Time… in Hollywood