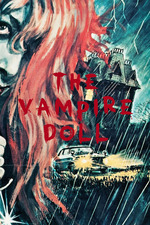 Michio Yamamoto enjoys an early credit as a second unit director on Kurosawa's Throne of Blood (let those arrows fly) before Toho's studio system made him the assistant to Kihachi Okamoto for much of the 60s. The bulk of his directorial output were horror films released in the early 70s, three of which were recently released on Blu Ray by Arrow Video. The trio are unrelated, but feature themes of vampirism in a contemporary (70s) Japanese setting, under the title The Bloodthirsty Trilogy. I had seen parts of the second one in my early teens, but on a specialty channel surrounded by similar visually striking Bava films from the 60s and the more lurid Hammer, it didn't really resonant. Over the decades my tastes have moved further towards the land of the rising sun and glorious technicolor, so I've been looking forwards to plunging back into this unique group of films.

The Vampire Doll (1970) is the first of the trilogy - and having viewed all three at the time of this writing, is easily my favourite.

Atsuo Nakamura drives through a heavy rainstorm at night to visit the family home of his girlfriend Yukiko Kobayashi (Destroy All Monsters), only to greeted by her scarred mother with news of her death. Beyond the gloom of the weather, a Lon Chaneyesque idiot manservant in Kaku Takashina (Black Tight Killers) and ghostly apparitions ramp the forbidding atmosphere up to 11... with the introduction of our golden eyed ghoul, the narrative turns to Kayo Matsuo searching for her missing brother (Nakamura). Without the religious trappings associated with European vampires, dealing with the creature creates all sorts of tension.

The film has a gorgeous colour palette, masterful pace, a unique monster, and atmosphere to spare.

The film also features characters telling ghost stories. When was the last time someone told a ghost story in a film that actually unnerved you? Maybe the first time you saw John Houseman in the Fog? Its a testament to the films' tone that its so chillingly effective.

You've most likely purchased this as a set, but if you only watch one of the entries, this is the best that the Bloodthirsty Trilogy has to offer.