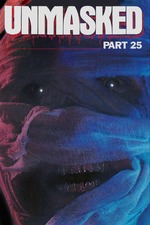 What's this "Unmasked Part 25" bullshit? It's clearly called The Hand of Death, although when it was released on VHS back in the day, the cover named it "Hand of Death Part 25: Jackson's Back".

And I should know, because I think that it's probably the VHS I rented more than any other when I was a teenager. Quite why I never just duped it onto another tape I don't know. Perhaps it had Macrovision copy protection, and I didn't fancy trying to watch it through a haze of ever-changing colours. Or perhaps I just thought, "Well I enjoyed that but I don't ever need to watch it again" every time... and then a few months later would feel the need to watch it again.

I mean, it's not very good is it. Yet there's something really compelling about it that keeps bringing me back. It makes no sense whatsoever: why... how... but... so Jackson is a masked serial killer, but he also plays himself in a series of slasher movies? And the police have never bothered looking for him...? What??? (And the final shot makes even less sense if you think this is called Unmasked Part 25.)

But the cheesy, cheap, badly-acted nature of the thing, the frequent sidetracks into British sex comedy tropes, and even the nonsensical premise... I dunno, I sort of can't get enough of it.

It helps a lot that it's super-violent, and that the gore effects (by Bob Keen's company Image Animation, who worked on Hellraiser) are really, really good. I particularly love the scene where Jackson kills his dad (who's played by a real professional actor, by the way) by crushing his head, and instead of deploying a fake head, you see the actor's real head, meaning it's really shocking when his left eye suddenly explodes in the same shot.