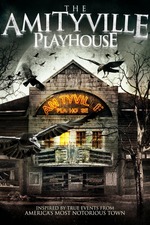 Today I learned that New Yorkers all say "aboot" instead of "about", and that there's nothing remotely fun about watching six completely appalling young actors pretending to be trapped inside a haunted cinema for 100 minutes. Perhaps the worst of them is the lead actress, who puts the "moan" into Monèle LeStrat with her whiny performance as Fawn, a recently orphaned schoolgirl who's inherited the disused theatre in nearby Amityville. But there's stiff competition from Linden Baker, who plays her relentlessly homophobic friend; the best thing you can say about him is that at least he seems embarrassed having to deliver his offensive dialogue. The movie's biggest crime, though, is to be super, super boring: a whole load of wandering around a building that's abandoned yet bright and sterile and completely without atmosphere; production design is non-existent. Meanwhile Fawn's friendly teacher is shown travelling to Amityville to rescue her, though bafflingly his story includes a series of completely superfluous flashbacks shot in the London pub where he spent his last evening before moving to Canada, erm I mean America. These scenes are hilariously clunky, and I wish there were a lot more of them.