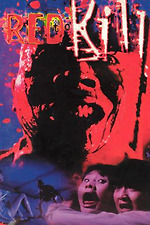 Red to Kill can be split into three sections. Which is your favourite?

Section 1.
Tang probably he thought he was being very progressive by setting his film in a home for adults with learning difficulties. They're sympathetic people, and there's even a bit of political comment in the form of the bigoted neighbours who stand outside, protesting. Unfortunately it's rather spoiled by what the script believes people with learning difficulties do and say, by the fact that they're played by non-handicapped people doing a lot of gurning, derping and belming while wearing ugly false teeth, and the neighbours' protests being things like "He smiled at me stupidly" and "He's a sex lupine".

Section 2.
Suddenly it turns into an incredibly harrowing, serious and drawn-out rape drama. The central attack lasts for ages, as does a scene depicting the victim's trauma following it (any excuse for some full frontal nudity though, eh Billy?), and then there's a pretty decent bit of courtroom drama. It's a whole lot less funny than Section 1, put it that way, and it hits hard.

Section 3.
The rapist is back, and now he's a supervillain, with the powers of ripping his clothes off dramatically, incredible superhuman strength, and the ability to penetrate any woman at will. It's a final showdown to the death! Who will win? Right versus wrong! Good versus evil! God versus the Devil! What side you on? (Sorry, got carried away there.) Anyway, it's all very exciting and brutal and nasty stuff.

tl;dr. In short, it's the primus sine paribus of Cat III horror. It's the apex, the pinnacle, the best and, yet, one that - to quote the opening of each South Park episode - "due to its content it should not be viewed by anyone".

Category three? Category one hundred and eleven, more like.