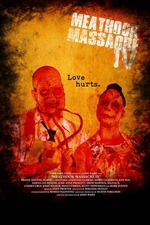 Deciding to go to Vegas, a group of friends celebrating a birthday head out into the desert to have fun only to stop off at a roadside building looking for help after a hit-and-run accident, but when the directions lead them into a crazed cannibal killer and his psychotic family they’re forced to fight them off before becoming food.

Overall, this was a pretty solid effort in the series. The film’s best aspects absolutely revolve around the various energetic confrontations that arise here, featuring a slew of enjoyable indie-flavored stalking scenes that go more for the typical quantity of encounters rather than suspenseful stalking. From the opening escape through the woods escaping the meathook-wielding killer to the encounter in the back of the store looking for help and the scenes of the group confronting the family at the store when they go to check on him. These are quite well handled and offer up a great mix of high-energy chasing or brawling once they find out the killer is involved in hunting them down, which is made all the more enjoyable with the continuous scenes of human butchery and carnage on display with the family members shown carving up bodies, harvesting innards and slicing up the remaining parts of the bodies which sets the stage for the psychotic dinner sequence that tries to offer something new to the setup. As well, when the film isn’t focused on the various encounters with the killer, it’s quite enjoyable. The central group of friends are shown to be incredibly sympathetic, coming off like a legitimate group that likes hanging out together with gentle ribbing on each other and playful teasing that would be at home with a group of friends who hung out pretty often. The kids end up following the more established genre tropes expected here once they encounter the hit-and-run accident and run into the psychotic family out in the desert where everything comes together, really giving this one a lot to like overall. There isn’t a whole lot to dislike here. The main issue to hold this one back is the wholly underwhelming and generally quick finale, which seems to be incredibly grand in build up which is let down in the execution. Once she’s been captured and is taken prisoner, the entire time is spent on looking for a big confrontation between her or one of the family members, yet that never comes. The manner of interrupting the dinner and getting it started looks to play it off, but having the killers sequestered and unable to do anything results in a somewhat lackluster final fight and brawl that seems to end rather quickly and then just ends, leaving a somewhat dissatisfying feel. As well, the typical low-budget indie feels here does stand out at times, from the general atmosphere and feel as well as some of the special effects work on display that some might have an issue with due to some oversight and obvious technical areas that give this type of production away. That is more of individual preference, though, and not indicative of the film as a whole, though.