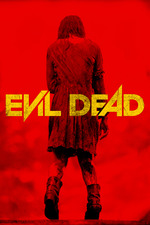 Certainly not bad as a reimagining of the original Sam Raimi film. Evil Dead is fun enough as a gore film, and scary enough as a traditional horror movie - while taking enough liberties with the first film while also paying homage to it - that it makes an entertaining viewing experience.

As expected of most horror movies, there's a lot of issues with Evil Dead; there are way too many exposition scenes, half of the characters are completely forgettable, and a good chunk of the character drama is tied behind things we're told, rather than shown. Nevertheless, the entertainment value of a movie like this is entirely placed upon its horror/violent elements, and that alone makes this movie a success.

Some of the scary scenes are a little too predictable (yet not nearly as bad as most other horror movies in the modern era), yet that's made up for with some absolutely phenomenal gore effects courtesy of a fantastic makeup and VFX department. Evil Dead also surprises every now and then with some rather stellar cinematography. It's a total shame that the rather fantastic filmmaking aspects of this experience are bogged down by poorly directed melodrama, but them's the breaks, I suppose.

Altogether, Evil Dead is a rather fun time if this niche of horror movies piques your interest. As an Evil Dead "completionist," I'm rather happy to have seen this film and was quite surprised to leave it with many positive remarks about it, yet it's not perfect by any stretch of the word.