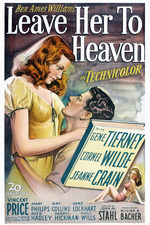 Tierney is fantastic in the lead role, and it’s definitely one of her best performances, conveying a coldness and menace that is chillingly effective. She manages to make this troubled and damaged character feel realistic and almost sympathetic, which makes it all the more disturbing.

The cinematography adds to this immensely, the vivid colours showing Ellen’s troubled mental state and exaggerated perspective. Cinematographer Leon Shamroy won an Oscar for his work, and it’s probably one of the most beautifully shot films of the era, managing to capture small glances and character interactions that make it all the more powerful, like Ellen’s smile suddenly turning into an intense stare.

It’s quite hard to categorise, having elements of film noir, thriller, and even horror in certain places, and I think that blend of genres makes it all the more distinctive. Leave Her To Heaven is a strange, absorbing thriller that starts to become a bit too melodramatic and neat as it moves towards the hurried conclusion, but was still a fascinating watch.