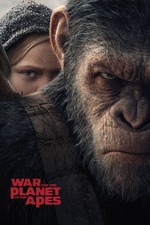 War for the Planet of the Apes isn't really concerned with the idea of combat. It mostly decides to wrestle against a multitude of heavy, capital-I Important topics instead, drowning its already submerged dead weight of self-seriousness with one of the bleakest, most uncompromising plot structures I've seen for a general-audience PG-13 film. Mostly, I found it hard to watch, with the inherent revenge-thread being one-upped by lashings handed out to apes and a horrifying depiction of labor encampment, but I also was slapped senseless by the silliness of it all, and whether this even works as effective allegory. The addition of comedic relief, strangely, only feels included in an attempt to heighten the supposed "gravitas" of its drama and the dismal proceedings of the trilogy's conclusion.

It helps, tremendously in fact, that the film itself is absolutely scrumptious and engaging when it comes to tonal control, to lingering, quiet mastery of gripping attention. Director Matt Reeves, from the first sinuous slow-motion frame to its triumphant last, has his eye locked in, and it's hopeless to observe yet impossible to look away. I can't deny its effectiveness, but oh boy, it wears out your eyes after forty minutes, and that's before Woody Harrelson shows up (sadly, in a rocky, half-assed Brando facade of a performance). Dawn, in comparison, is more expertly balanced in its classical themes of betrayal than War's illumination of the ape's contradictions in regards to violence and leadership, but Reeves allows this story to fully play in the hushed echos of the winding, evocative landscapes and in elongated conversations over subtitles, and that's commendable. So is much of this movie, but the slathering of thin misery makes the whole experience exhaustive.

- Opening scene is one of the best sequences of the year so far.

- I found Serkis less impressive here than in Dawn, but still, wowzas.