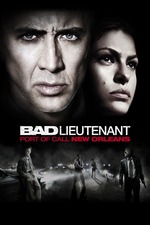 The Bad Lieutenant: Port of Call - New Orleans isn't dreadfully dull or sloppily disjointed like its title suggests; Instead, It's one of the most truly extraordinary films to ever fall into a sense of obscurity or opaqueness. While getting critical acclaim, audiences were divided. I just don't think they knew what hit them.

Simultaneously being Werner Herzog's and Nicolas Cage's finest work, The Bad Lieutenant is a story of self-hatred and disillusion set against a landscape of both physical and emotional devastation, that being the aftermath of Hurricane Katrina. The story is about Terence McDonagh, an unstable individual employed in law enforcement, and his crazed lifestyle. The audience follows Terence's soul, one lost in a sea of debris that once made up a lively society, and his quest to be an inherent being. Disgustingly primal and disparately lost, Nicolas Cage's performance here is utterly astounding. Truly, the range shown here is beyond belief.

And that's really the finest attribute of this masterpiece, the character arc. Watching McDonagh descend into the darkest depths of his own troubles, tribulations, and desires is both mesmerizing and honest. Werner Herzog's direction is perfect for this story, and his knack for the surreal oddly fits such a thorough examination of man's greatest flaws. In particular, the completely batshit final 20 minutes bring both brilliant doses of dark humor and shivering horror, and it is as hilarious as it is incredibly disturbing.

Overall, The Bad Lieutenant feels like a lost work of art, one that isn't as discussed, analysed, or cherished as much as it should be. The direction is ballsy as it is beautiful, the acting is dedicated and overflowing with emotion, the setting is shot beautifully with a sense of formalist chaos, and the story is a great anchor for such a refined and seedy character arc.

And it has iguanas. Hell. Yes.