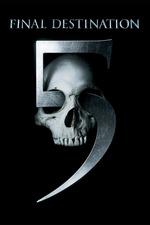 It's impressive how adept the Final Destination films are at maintaining their formula. Most horror franchises that make it to part five struggle with their identity, or dive into complex, unneeded mythology. They feel like they need to change to keep audiences interested, and usually, it results in taking too many vital components away from what viewers wanted in the first place. Even with the worst of the Final Destination movies (part 4), there's a clarity of purpose to each installment - allowing the rube Goldberg carnage to evolve without losing sight of the initial premise. In the case of Final Destination 5, the film is actively aware of what audiences are expecting, and its framing and build-up is expertly handled, almost balletic in the happenstance that leads to gruesome instances of death. The combination of nasty practical effects and jugular CGI bloodletting is exceptional here, as is the unpredictability of how each scenario will unfold. You're never quite sure of what will happen next, and the principal set of characters are co-workers in this entry, which allows for a few interesting ideas regarding the ladder to success. Kill or be killed. Won't spoil the ending here, but it's amazing, and exactly the kind of inventiveness that is usually missing in a big budget horror franchise this late in the game. These movies rock, it's just the truth.