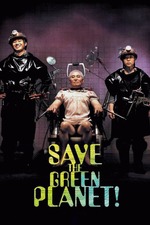 The fate of the human race hinges on a bitter, paranoid and eccentric beekeeper. With the help of his tightrope walker girlfriend, he kidnaps and tortures a businessman who he believes is an alien hiding among humans with the intention of destroying the planet.

Melding horror, black comedy, revenge thriller and science fiction into an unpredictable, demented, cohesive whole, this is a film that never stops expanding on itself and consistently refuses to be placed in any sort of conventional box. It is a violent hope-killing tragedy that pokes fun at how Hollywood often tells stories with one-dimensional characters, one innocent hero and one merciless villain - in Save The Green Planet! the kidnapper is all three: a complete idiot, a deranged psychopath and a tragic man. The gorgeous cinematography reflects the tone perfectly, giving the movie a harsh look and feel with its heavily saturated colors and aggressively shaky zooms. It is a vicious film, both in how far its willing to take its utter insanity as well as its brutal and unforgiving treatment of every character. This is one of the absolute zaniest straightforward narrative features I've ever seen and I implore everyone who thinks they can handle it to give it a watch.